Don’t shoot me! I know I am a little delayed in sharing the next post of my Epic Indo-Nepal Road Trip. However, violence is not the solution. You got to be peaceful about it. Especially, if you are visiting the serene Swayambhunath temple in Kathmandu -for that is where we went next after the Pashupathinath temple and the Budhnilkantha temple on our Day One at Kathmandu. With the earlier two temples, we got a good insight into the Hindu way of life in Nepal and what was left was to explore the Buddhist aspect of it. The Swayambhunath temple was just perfect for that.

The Boudhanath Stupa and the Swayambhunath Stupa were the two places on our itinerary. While all of us would have loved to do both, we were short of time and needed to pick one. Encouraged by our local cab driver, we chose to head to the Swayambhunath temple – the place where Kathmandu is said to have originated from.

The legend of Swayambhunath temple

A Bodhisattva by the name Manjushri is said to have had a dream of a Lotus growing in a valley. Following the same, he reached the present day Kathmandu Valley to find the very same lotus. He cut the lotus off in a manner where the water surrounding it drained away and the Lotus magically transformed itself into the present day stupa. Swayambhunath is the name given to is for it means “self-created“.

It is this legend that is the reason for the belief that Kathmandu originated from here. Though the present day evidence goes back to 2000 years when the first Licchavi King Manadev is said to have built the current Swayambhunath Stupa. Today, this place not just has the main stupa, but plenty of other interesting things to see.

Located high on a hillock with 365 steps to climb, this Stupa kindled my interest with its story. Did I climb those 365 steps to attain my nirvana? Nope. Not this time. I mean, I was on a road trip with ScoutMyTrip – naturally, we used the road to reach the nearest entrance. 😉

The first thing that we saw were lots of monkeys. Based on my earlier research on the Swayambhunath temple, I knew it was called a “Monkey temple” but this was turning out to be the Monkey’s temple. They were all over the place – looking at you slyly, walking alongside you as if they were your guide and sometimes, even ignoring you to have their own drink of water. I admit that I like animals but when it comes to a monkey, I am on my guard with my bag and other possessions. I have had my share of incidences with them like the one that I described in Mandore Gardens of Jodhpur. Naturally, I had my 3rd eye open out for them.

Having said that, I did find them extremely amusing. It was nice to see them so comfortable in their home and coexist with the inhabitants of the Monastery within the Monkey temple. After a while, they became a natural addition to the whole environment and I ceased worrying about them.

Wishing at the Peace Pond

As you enter through the side gates (shortcut gates as I would say) of the Swayambhunath temple, you will encounter a beautiful fountain – the Peace Pond. Right at the foot of the lovely Buddha statue is a small cauldron. They say that if you manage to flick a coin into it, your wish will come true. These are not ordinary coins but ones that are bought from one of the vendors sitting there. I saw a number of people taking up the challenge and after I was done with my entire tour of the Swayambhunath temple, I did too. What did I want so desperately?

Well, I wished for a better aim and used the 10 pennies to practice just that!

Our guide at the Swayambhunath temple decided that the grand finale of his tour should be the main Stupa and hence, we first set about exploring the other parts of this large temple complex. Our guide gave us some interesting tidbits about this place. One of them was the fact that the two chief beliefs of Nepal – Hinduism, and Buddhism coexisted and in some ways, amalgamated into each other. He pointed out at the Hindu temple opposite a monastery as an example.

At the first look, with its prayer wheels, it looked like a regular Buddhist temple but once you walk over to the other side, you would be surprised to not see a stupa. Instead, there is a Hindu shrine with the idol of Saraswati and Ganesha resting amidst the prayer wheels. All along the sides of this section are smaller idols of various Gods – all of them coming together to give you a distinct feel of Hinduism. For me, it was quite fascinating to see such a unique blend. Goes to show, how everything can peacefully coexist in this world.

I mentioned the smaller idols along the walls of the Saraswathi temple. Well, they weren’t just there. They were all around the next few stupas that we saw. At every few meters, you would find mini stupas set in the center with prayer flags all around. While I found the stupas quite similar, it was the idols that caught my interest as I kept comparing them to the ones that I had seen in India. The proximity of the two regions – Nepal and India and their cultural similarities were so evident in these idols. These idols as the guide told us, were made by various artisans whole left them here as their way of exhibiting their skill.

Around some of these stupas, were huge bells. Some of them locked for the fear of damage over time. I found these quite fascinating and artistic and would sure have loved to hear the gongs. I even suspect that these were used to message around. If only I could ring them once!

The Pagoda of Ashes

One of the interesting parts of this visit was finding a Pagoda that was filled with stones. Nestled between those stones were white capsules that contained the ashes of the dead. Our guide explained to us that as per the Mahayana way of Buddhism after the dead are cremated, some ashes were stored in these white capsules and left behind in the Pagoda. The majority of the Ashes were washed away in a river, quite like the Hindu rites for the dead. With this interesting bit of information, we finally ascended a flight of stairs to reach the main stupa of Swayambhunath temple.

The main stupa of Swayambhunath temple

If there was indeed a lotus that turned into this stupa, it sure must have been an impressive one. The stupa commanded attention in its quiet, serene way – it was there big and bright and yet did not overpower the atmosphere. We approached the same from the side that had several smaller shrines set in a cluster. This is called the Swayambhunath Chaitya.

Design of the main Stupa

The most prominent thing about the Stupa were the eyes of Buddha in each direction, almost as if they were watching out for us. Carved on the gilded hoods or torans, are 5 Buddha figurines that represent the 5 senses. The gilded hoods (toran as they are termed) along with the eyes have been designed such that they represent certain beliefs in Buddhism. Though I tried to understand it all, I could not grasp it as well. I think it will take me some amount of dedication to get into the depth of it but for now, I am content to know that everything about the Stupa had a deeper meaning.

If you notice, there are some spirals that lead to the top of the Stupa (shikhara of the stupa). Each of these represents the ascent that needs to be made for Nirvana.

Around the Main Stupa

Facing the stupa in 5 directions were smaller shrines that connect to the 5 elements of nature. And right at the top of the 365 steps is a golden Vajra along with the guardian lions. There were two white colored temples around this same stupa which sadly are no more as they were destroyed during the 2015 earthquake. However, there are plenty of other smaller temples like the Hariti temple as seen below. The Hariti temple as our guide told us, was quite popular for the Goddess within the temple was said to cure all diseases.

As you walk around the Stupa, you will also, come across the 365 steps that are actually meant to be climbed to reach this Stupa. There were plenty of people doing it and as I saw them, I realized that it was one way in which grit, determination, and focus were driven into you by making you work towards nirvana.

All around the Stupa were prayer wheels – which you are to turn as you walk clockwise around the Stupa. It is a tradition and a ritual that every visitor here follows. You do not need to learn their prayer, just your faith is enough to allow you to finish this ritual.

Being one of the oldest Buddhist temples in Asia and the fact that it is a prime tourist attraction, there is a bit of commercialization that you see at the Swayambhunath temple. From trinkets to curious and clothes, you will find plenty of shops selling goodies that you can take home as a keepsake. Remember one thing – they are priced higher than what you would get in the city. Hence, there is heavy bargaining to be done. Even if you are not looking at buying something, I suggest you do some window shopping. Trust me, the sights you are bound to see are quite amusing and interesting.

Once we had seen the main stupa, we returned back to our Oyo rooms Kathmandu to get ready for a cultural evening – in a Nepalese way. What I mean by that – Aha! Coming soon! For now, just relish the tour of the Swayambhunath temple and message in on what you thought of the same.

P. S: I visited this temple as a part of my Indo-Nepal road trip with ScoutMyTrip.com

I am a Post-Graduate in Marketing by qualification and a travel blogger by passion. Besides travel, I enjoy photography and if you don’t find me at my desk, I would be out playing badminton or swimming or just running. I believe in planning for every long weekend through the year. And when I cannot travel physically, I travel virtually through this travel blog. My travel stories have also, got published on various websites and magazines including BBC Travel, Lonely Planet India and Jetwings. I have recently published my first book – When Places Come Alive – a collection of stories that are based on legends, landscapes, art and culture of a place which is available in both ebook and paperback format.

65 thoughts on “Exploring the Swayambhunath Temple in Kathmandu” 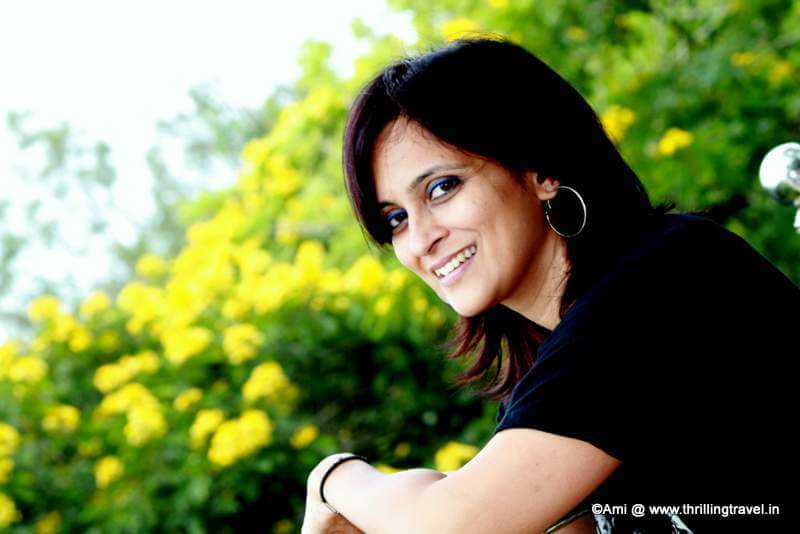 A restless ball of energy born with a travel bug. Click the image and discover more about me. 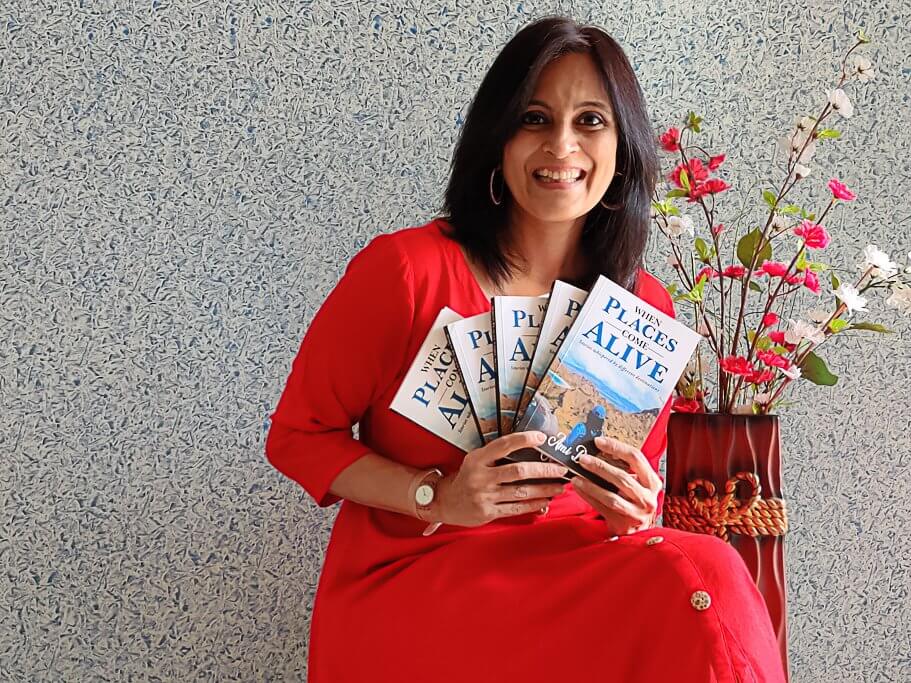 Presenting my new book – When Places Come Alive. This is a collection of short fiction stories from across the globe with tales that bring alive culture, traditions, history, art and even landscapes. Do check it out here