Mandore, the erstwhile capital of the Jodhpur Kings, is an amazing yet abandoned tourist destination in the city of Jodhpur. Though right in the middle of the city, this one is often ignored or skipped for varied reasons. I for one, am glad that we did not miss visiting this ancient capital of Mandore.  Of course, I have my friend Swati to thank, as it was she who suggested including it in our Jodhpur itinerary. Let me start with a quick introduction to Mandore.

Mandore is the old capital of the Jodhpur Kings and finds a mention in history, as early as the Ramayana. They say that Ravana is considered as the “son-in-law” of the Brahmins here as he married Queen Mandodari from Mandavyapur – the old name of Mandore.The capital went into ruins once the Maharajas of Jodhpur abandoned it and moved to Meherangarh Fort. The place has witnessed many invasions – some from famous names like Mohammed Tuglaq, Allaudin Khilji and Iltushmish and that is one of the main reasons for moving to Meherangarh as the latter offered better protection to the Royal Powerhouse.

Today, what greets its visitors are gorgeous green gardens with mischievous monkeys, cute birds, some street vendors and stunning pieces of architecture and craftsmanship from the eras bygone. There isn’t much information that I could find here – at Mandore as well as on the internet and which is why, this particular post is going to be more of a photo-journey, punctuated with my anecdotes.

My visit starts with the Cabbie in Jodhpur, who told us that it was not worth going to Mandore as no one goes there any more. Instead, he insisted that he take us to other places like Umaid Bhavan or the emporiums. Having firmly declined the offer, we were unceremoniously dropped off at the main entrance of Mandore Gardens. The first impression that I got was that this was just a green garden with lots of vendors and maybe the cabbie was right. Probably, we should turn back and check out the other places in Jodhpur. However, being a street shopper, those little wares along the road, kept me going further into the gardens.

Having walked hardly a few meters, I was blown over with a sight that made me feel that I was in Angkor Wat.

I knew then, that coming to Mandore Gardens was definitely not a mistake. The lovely sites that you see in the pictures were the cenotaphs of the Jodhpur Maharajas. This cluster of red buildings surrounded by the green trees is bound to bring out the photographer in you. You will feel the urge to capture these stunning pieces of history from every possible angle.

The lack of signage and information left us wandering on our own and resorting to some guesswork with respect to the architecture and the sculptures within the cenotaphs. The only signs that we saw, were the names of the Maharajas’ for whom these gorgeous buildings were erected.

The picture above has the cenotaph of Maharaja Jaswant Singh in the background. The cenotaph was simple but high storied and the view from the top of the stairs was quick stunning as seen in the picture below. They say that Mandore was a center of arts and craft and sure enough, these cenotaphs are testaments of the same.

Each cenotaph is different from the other and had I embarked on visiting each and every one of them from inside, a single day may not have been enough. Among the few that I did visit, the one built for Maharaja Ajit Singh stole my heart.

The entire structure was like a beautiful temple with beautiful carved pillars and niches. This one also, seemed to have a first floor. I did spot something like a staircase but the same seemed to be closed, leaving no chance for us to explore it any further.

The most magnificent thing about this cenotaph was its ceiling. High up there, you could see the lovely carvings of celestial damsels in various poses. Here are some pics that I managed of them.

Adding on some more of those corners and niches that enthralled me. As you will see, they have not been maintained well as some of these sculptures had pieces falling off.

The cenotaph is associated with a bit of a “bloody” history . It is said that when Maharaja Ajit Singh died, as was the custom, his six wives committed Sati – basically jumped into the funeral pyre. If that wasn’t enough, 25 of his concubines and some 30 odd female slaves also, jumped it. I wasn’t aware of this when I was busy clicking pictures and admiring his cenotaph and possibly, could have gone on to fill my entire memory card with pics but then, that one thing to stop me happened – which was Monkeys 😀 .

As I bent over to do my laces, one of them took a flying leap right over my bent head to catch – not me, but another of his mates. My daughter had a fright of her life and burst into tears, while my wicked friend Swati laughed and cried for not having captured the moment in her camera. Me? I was just stunned and amused!They were not just restricted to the gardens but were all over the cenotaphs and were eyeing my camera and lens very longingly. The mere presence of them had my daughter whimpering and as they started chasing each other around the pillars, we hurried out of the Cenotaph.

Imagine, if I had decided to look up right then as the monkey flew over my head!!!

It took a few parrots to calm my daughter down. This place is full of them, especially this one dead-wood tree that had so many of these green beauties fluttering around, preening themselves up for me as I captured them on my camera.

As we moved further on, we saw the old Mandore Palace and Fort. Unfortunately, the visiting hours for the same seemed to be over and the place was shut down. All I could treat myself was with some photos of the exteriors but well, I guess, better than nothing! There is a government museum that is set up within these monuments, which I hope you have better luck checking out.

We turned around towards the exit at this point and glanced upon the Hall of Heroes and the Deities on the way. The Hall of Heroes have the statues of the erstwhile rulers and heroes of Mandore. They were built to honor them for their deeds.

While we exited, we saw some more of those Langurs hanging on the trees. I just had my daughter calmed down when one of them fell down like a ripe fruit from a tree. Plonk! Right in front of her. That marked the end of my exploration as I had to rush my bawling child out of the park 🙂

I would have liked to have one of those pesky guides here to explain things here. Just when you need them, they weren’t around, The lack of information made my visit seem incomplete. Somewhere with its history of being abandoned by rulers, we, the present generation, too seem to have abandoned this amazing bit of heritage. The sad fact is that there isn’t much documented on the web either and my quest to know more about Mandore remains incomplete. 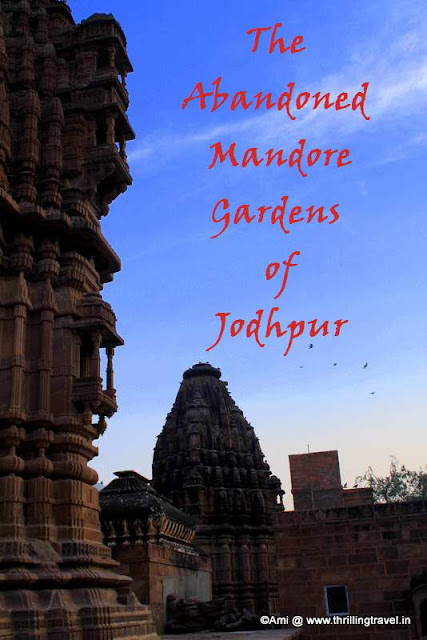 Despite its poor maintenance, this place has its own charm and appeal – something that any visitor to Jodhpur should not miss.  I would definitely recommend Mandore Gardens as one of the key things to do when in Jodhpur. Leaving you with a picture of the Gardens post the Sunset – you might just want to pin that one!

Getting to Mandore Gardens:

My wife and I felt drawn to Spain before we even lived there. Something about...

Most of us have seen the largest mammal on land but only a few that...

If you are in Leh, the one thing that most people recommend that you do...

India is a land of diverse culture and traditions and what is more interesting is...

Growing up as a child in Switzerland with Dutch parents, I feel strongly rooted in...

Frenzy! That is what I felt when I visited those small lanes of the uber-rich...